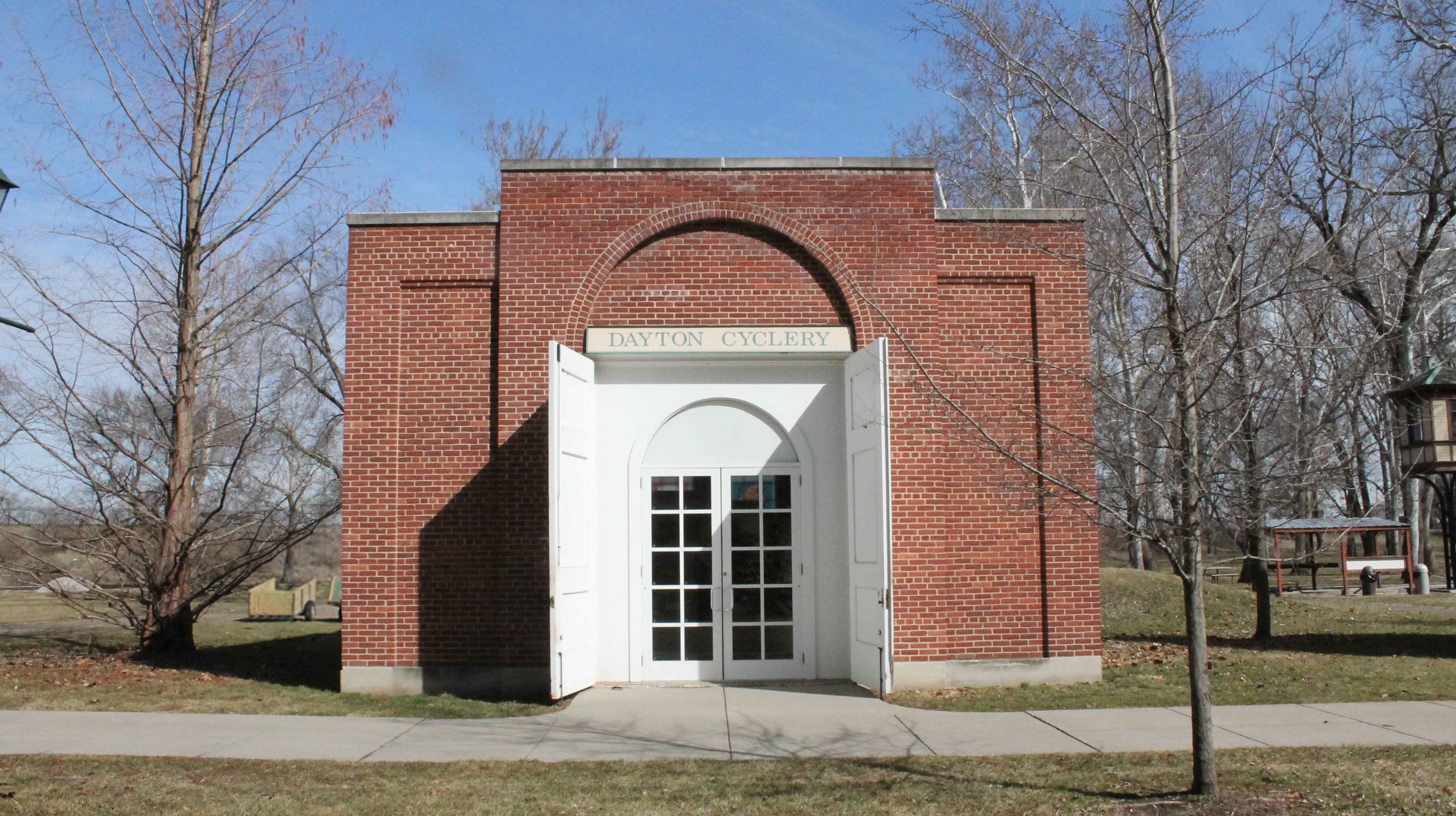 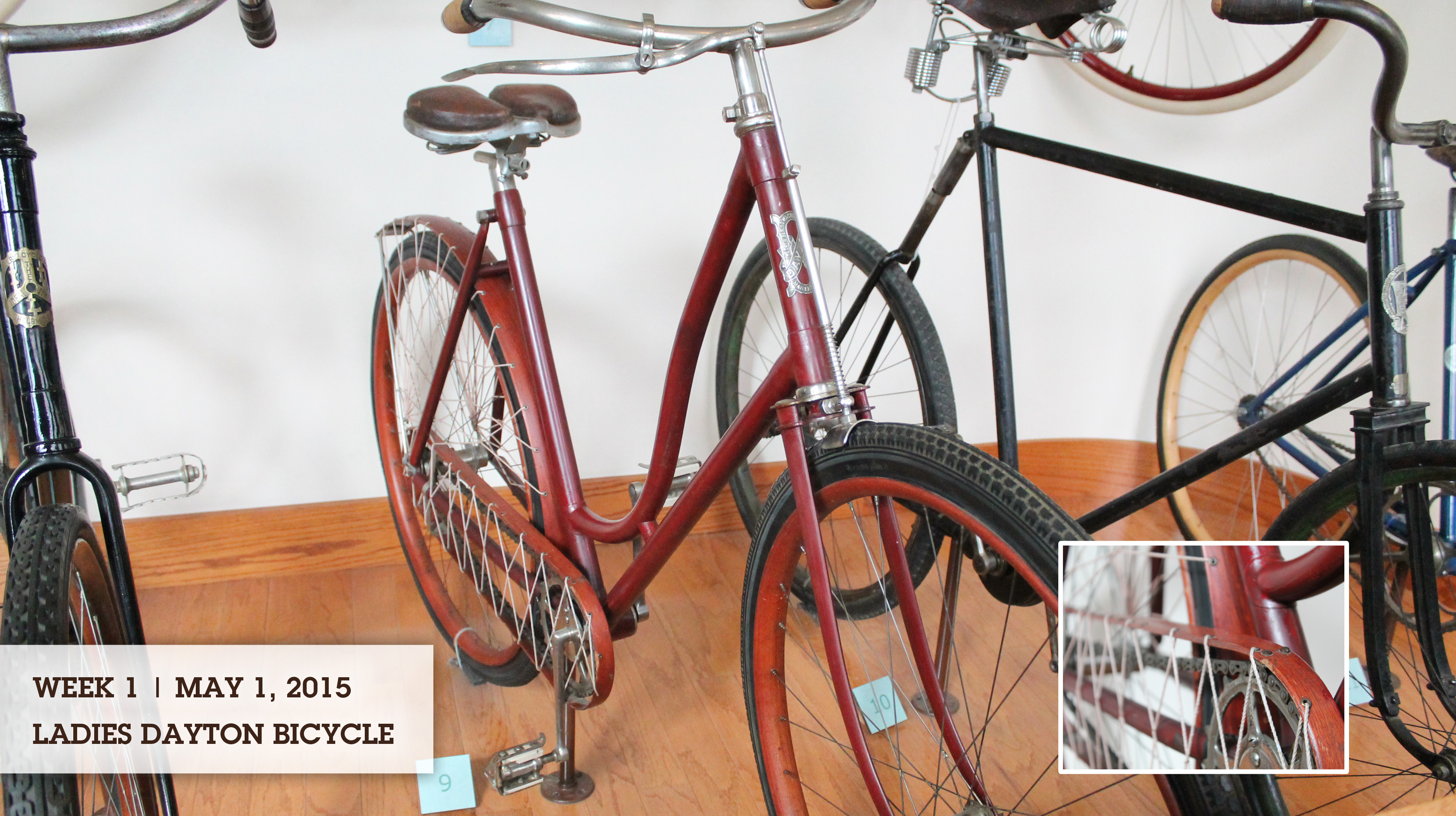 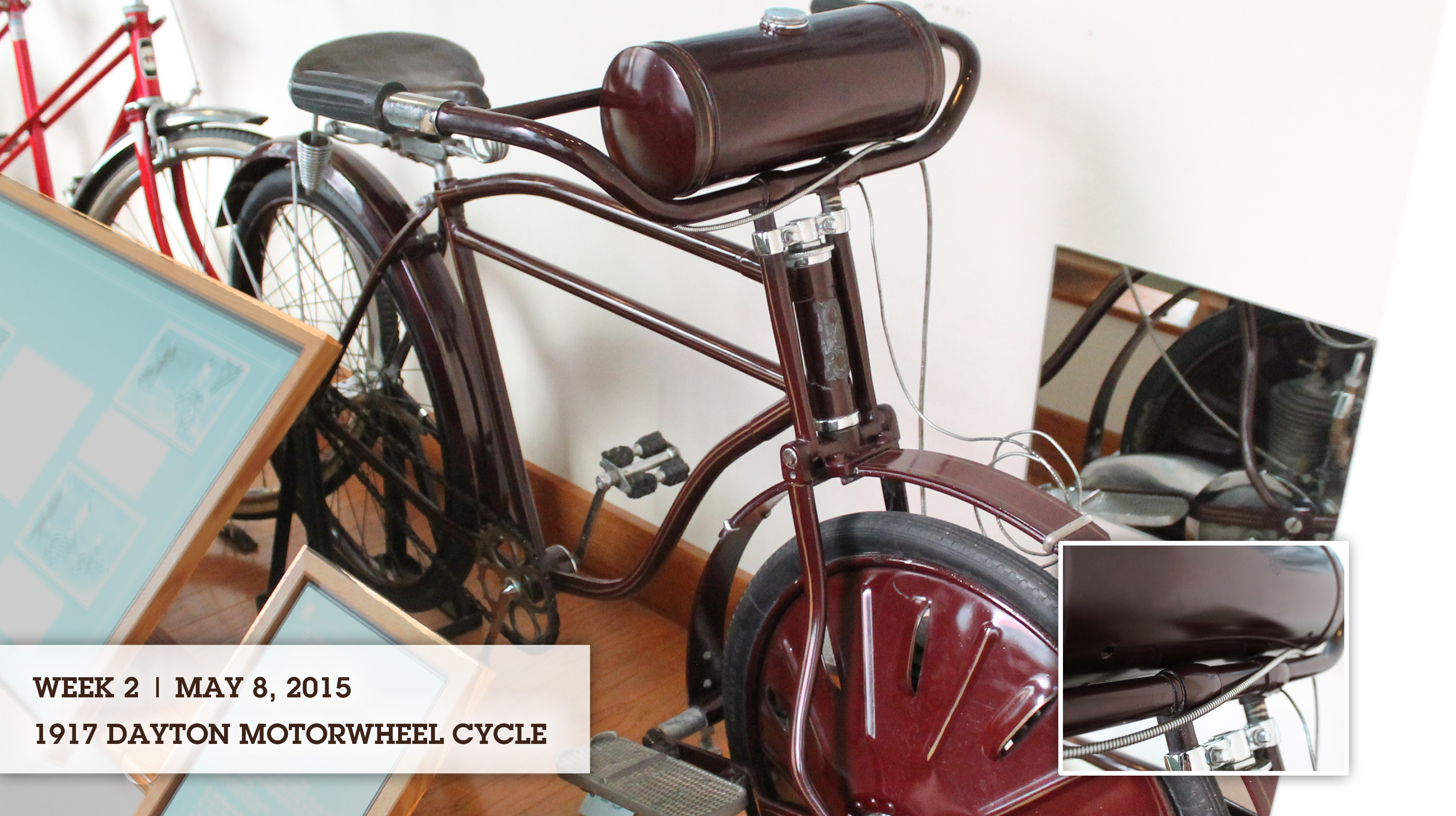 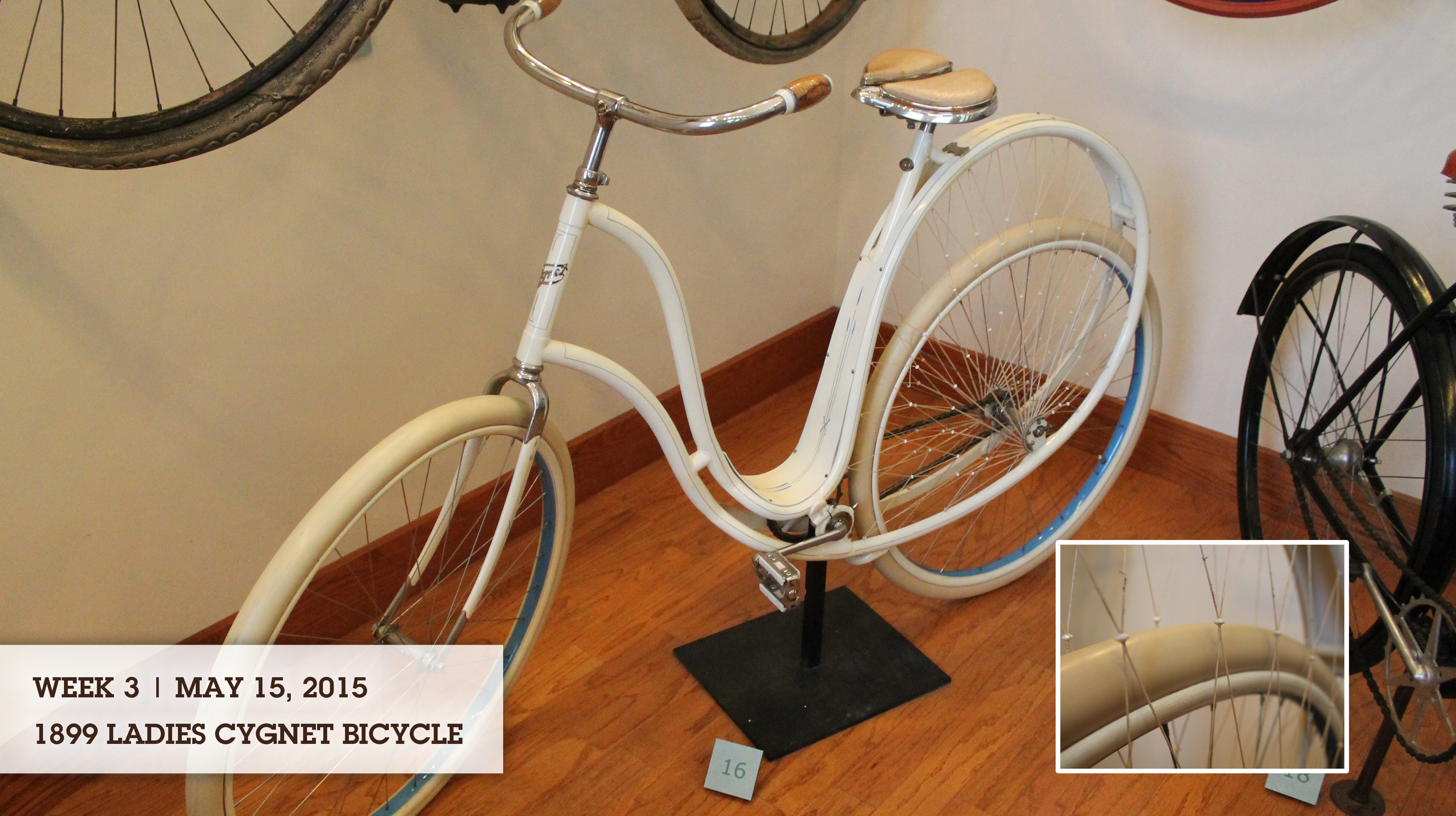 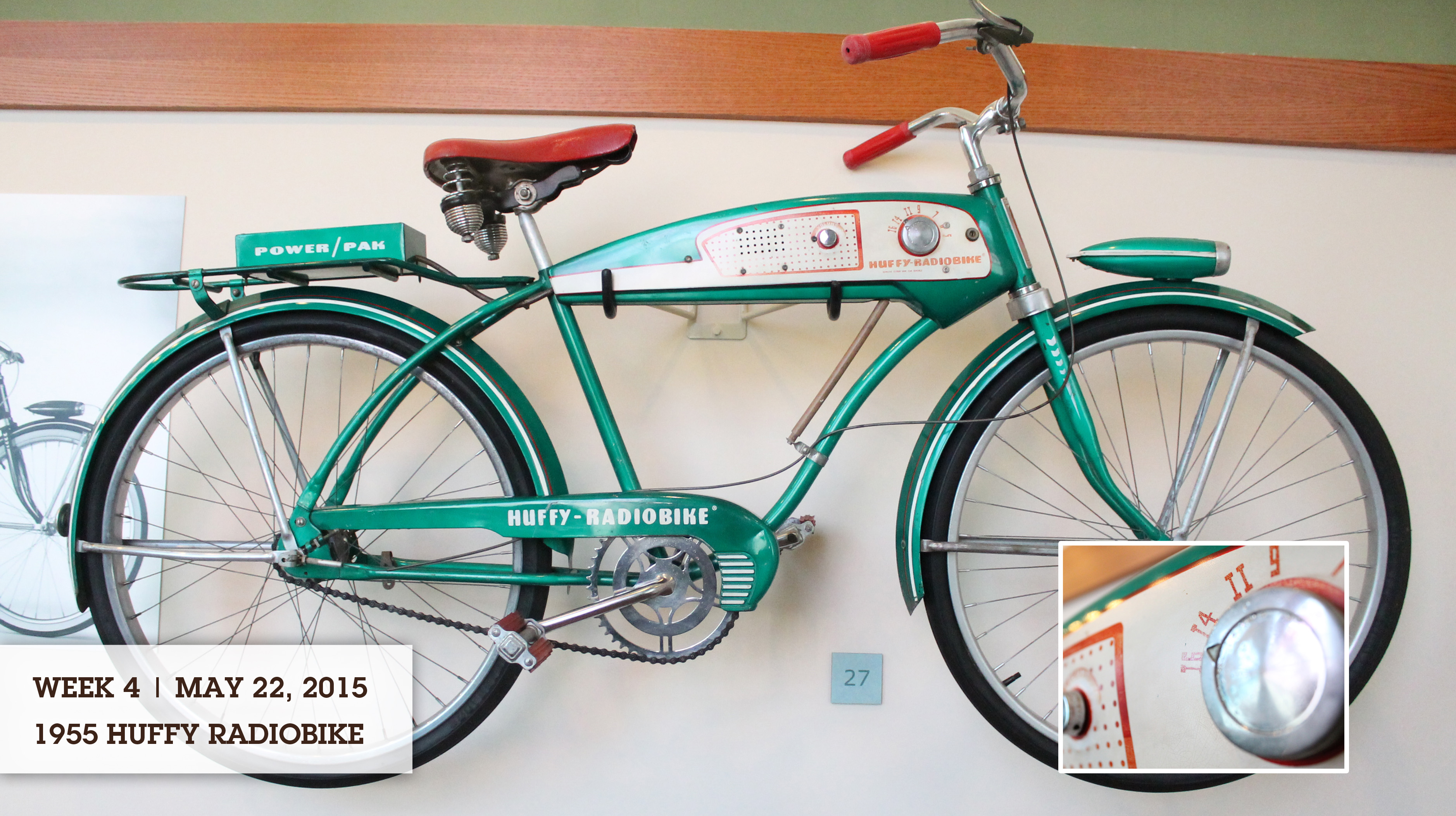 May Mystery at the Museum Solved…

The answers to May’s series of Museum Mysteries are (in weekly order):  a Ladies Dayton Bicycle, the Dayton Motorwheel Bicycle/Motorcycle, the Cygnet Bicycle, and the Radiobike. All of this month’s mystery artifacts, and many others, are on display in the Watervliet Shaker Building at Carillon Historical Park! For a sneak peek at next week’s Mystery at the Museum artifact photo, be sure to pick up a FREE copy of the Dayton City Paper next Tuesday!

In the late nineteenth century, a new craze was sweeping the nation: bicycling.  This popular pastime grew exponentially, thanks to the development of the safety bicycle, which was deemed safe for women and children to ride. Several manufactures throughout the Miami Valley began producing these new modes of personal transportation, as well as making improvements to their design. The Davis Sewing Machine Company, the predecessor of Human Manufacturing Company, began manufacturing bicycles in 1892. This 1898 ladies Dayton model was made with protective netting that covered both the rear wheel and the chain to help prevent women’s skirts from getting entangled in the spokes and chain.

With the advent of the automobile, the bicycle’s popularity began to decline. Innovations in combustible engine manufacturing meant that these engines could be used just about anywhere, including on a two-wheeled bicycle.  Inventors in Europe had been experimenting with early motorcycles since the 1880s, and in 1901, America’s first motorcycle company, the Indian Motorcycle Manufacturing Company, was founded.  Dayton’s Davis Sewing Machine Company had been a leading manufacturer in bicycles for more than two decades when they introduced and patented the Dayton Motorwheel in 1915. This motorbike combined a light-weight frame with both foot pedals and a small engine, manufactured by the American Magneto Company. The cycle could be ridden either as a regular bicycle or as a motorcycle.

By the time they began making bicycles in 1895, Dayton’s Stoddard Manufacturing Company had a long standing reputation for making high quality agricultural implements. The unique shape of this bicycle’s frame resembles its namesake, a young swan and ensures a smooth comfortable ride for the cyclist.  It also has a protective netting guard covering the rear wheel to help keep ladies long skirts from becoming entangled in the wheel’s spokes.  Stoddard only manufactured bicycles for a short time, from 1895 to 1899, as the company’s attentions shifted to the manufacture of automobiles instead.

When the Davis Sewing Machine Company was forced to close its doors in 1923, an enterprising young Horace M. Huffman Sr., acquired the company’s inventory of bicycles, sewing and washing machine parts and one of the factory buildings, and started the Huffman Manufacturing Company. Over the next few years, the company was again producing bicycles in the city of Dayton.  Demand was high and sales were so strong that by 1948, Huffman Manufacturing Company celebrated its one millionth bicycle. Consistent improvements and innovations had made the company a success and a leader in the field of bicycle manufacturing.  An example of this can be seen with the Huffy Radiobike, which came about during the transistor radio craze that swept America in the early 1950s. This bicycle features a radio built into the tank, and an antenna and battery pack which is located on the carrier platform on the rear of the bike.  In 1977, as the world’s largest producer of bicycles, the company changed its name to The Huffy Corporation.