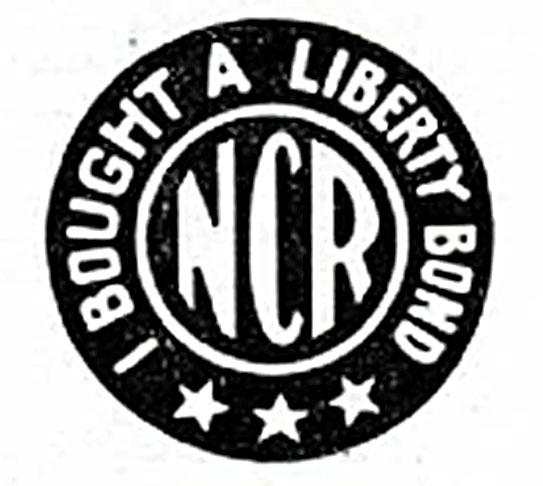 “Send your money or go over yourself. Enlist or invest.” – Anonymous, NCR News, April 1918

When the United Stated entered the First World War in April 1917, the United States government, with the backing of the U.S. Treasury, issued a series of bonds known as Liberty Bonds to pay for the war. Focused propaganda programs were launched in an effort to get the American public to support the allied cause by purchasing these bonds. Citizens were bombarded on a daily basis with messages proclaiming that it was their civic and patriotic duty to purchase these bonds. Manufacturing firms, like NCR, often supported these bond issues by posting signage throughout their factory buildings, as well as hosting rallying events like bond drives. On October 3, 1917, a Liberty Loan Booster Meeting was held in the NCR Schoolhouse in support of the Second Liberty Loan, which had been issued by the government on October 1, 1917. A description of the rally was printed in the November 1917 issue of the NCR News, Vol. IV, No. 5:

“Before entering the hall we could hear the fife and drum corps, who were dressed in colonial costume, depicting the spirit of ’76… The stage was occupied by a number of Red Cross nurses at the left-hand wing, by the former employees of N.C.R., who have been drafted, and are now stationed at Chillicothe, on the left center; on the right center by a group of veterans from the Soldiers’ Home, and on the right wing by members of the Aviation Corps- former N.C.R. employees- and by twelve Boy Scouts.”

Proclaiming that purchasing the government bonds was not only a patriotic duty but also a sound investment, NCR went so far as to finance employee purchases of the bonds by establishing interest free loans with a payment rate of $2 per week for each $50 bond. By the end of the rally that evening, the company had raised $101,500 for the war effort. Every employee who had purchased a bond that night was given the emblem pictured here.