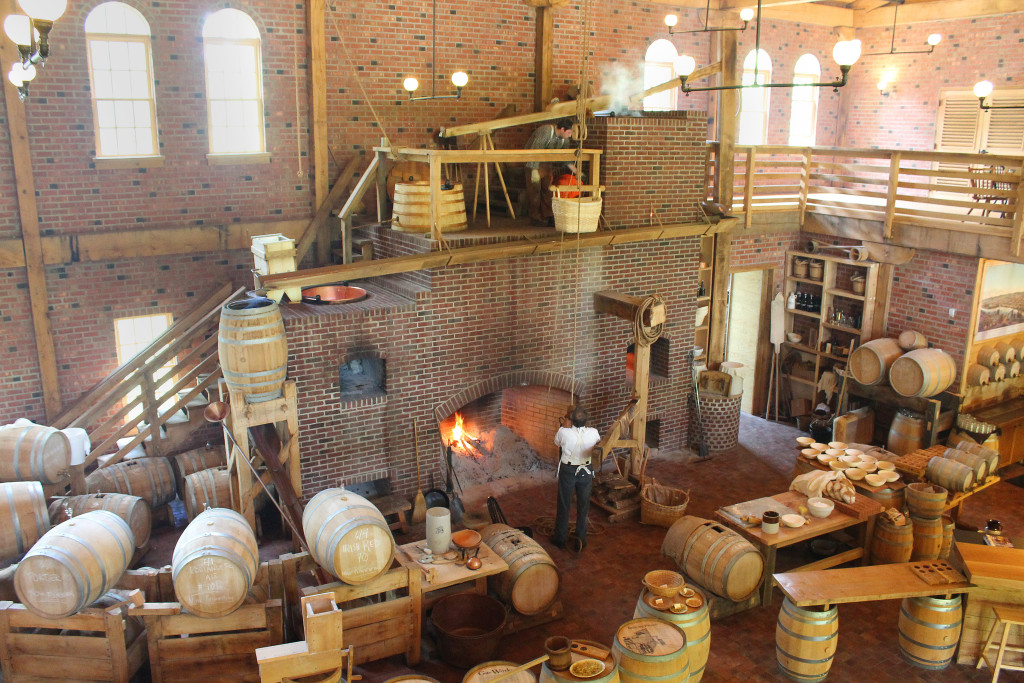 Carillon Brewing Co. offers visitors a glimpse into 1850s-era Dayton through the authentically prepared food and drink of the times. It’s the nation’s only production brewery in a museum.

Gas copper lamps light the walkway outside, and beyond the large white oak corridor doors — sash-sawn in period fashion with hand-forged hinges and handles — the smell of charcoal and wood fire, sugary wort and timber fill the air.

American Oak barrels line the lower floor of the brewery, each one capped by an artful and educational panel detailing the history and science of brewing. In sourcing city directories, canal records, farmers’ reports and the like, Spears carefully analyzed the influences of breweries on the city’s evolution during the latter half of the 1800s.

“As brewing industries grew, so too did the agricultural support,” he explains. “So too did the transportation support, and other industries. Everything was growing at the same time.”

At the foot of the furnace, dressed in an intricate flounced skirt, an assistant brewster tends the fire. Nearby, malt is milled by hand; oven-fresh spent grain bread is baked; a man mends his trousers with thread and needle; a growler of ale is filled; and a costumed wait-staff presents Wiener schnitzel, herb-roasted split chicken and more. The historical German, Irish and English offerings are in homage to Dayton’s early settlers.

“Carillon Historical Park is the only museum with a licensed production brewery, and the only brewery in the U.S. replicating the historical process,” says Spears. “On the physical construction of the building, it was a matter of, ‘If we’re going to do this right, well, let’s truly be a museum and replicate everything.’ ”

Carillon Brewing did this by re-creating 1850s Dayton life via presentations, brewing production, exhibits and a full-service restaurant. Theirs is a story of a developing Midwestern city in a growing nation. It’s a tale that spans agriculture, industry, science, immigration, civilization, progress, culture and more. And all of it is told through beer and food. Plans for the brewing complex began in 2007 and Carillon Brewing Co. marked its grand opening in August 2014.

With every grain of hand-milled malt, with every batch of boiled wort, not only is history replicated, but Carillon Brewing Co. tells Dayton’s story in a new, fun and fascinating way — a tale that its creators hope to expound upon in the future.

“An addition to the building, out among the beer garden, will be a wine pressing house,” explains Kress. “We have the infrastructure to make distilled spirits as well, so that would bring us full circle. When we have a facility that is able to teach these historic processes of distilling, brewing and winemaking, the project will be complete.”