Thanks to help from President Franklin D. Roosevelt’s Works Progress Administration, a championship soap box derby track was built in Akron, Ohio, resulting in the move of the All-American Soap Box Derby race from Dayton to northern Ohio. Despite the move, Dayton continued to host races for years, sending its city champs on to Akron for a chance to compete for the national title. With the onset of WWII, the tournament officially suspended activities until the summer of 1946, encouraging everyone to concentrate on the war effort. In 1949, Dayton’s race was held at Wright-Patterson Air Force Base, as can be seen in this aerial image, by photographer William Preston Mayfield. Here, the race track and starting line are clearly visible with a large hangar and several airplanes parked off to the right. This photograph is from the William Preston Mayfield/Marvin Christian Collection at Dayton History. 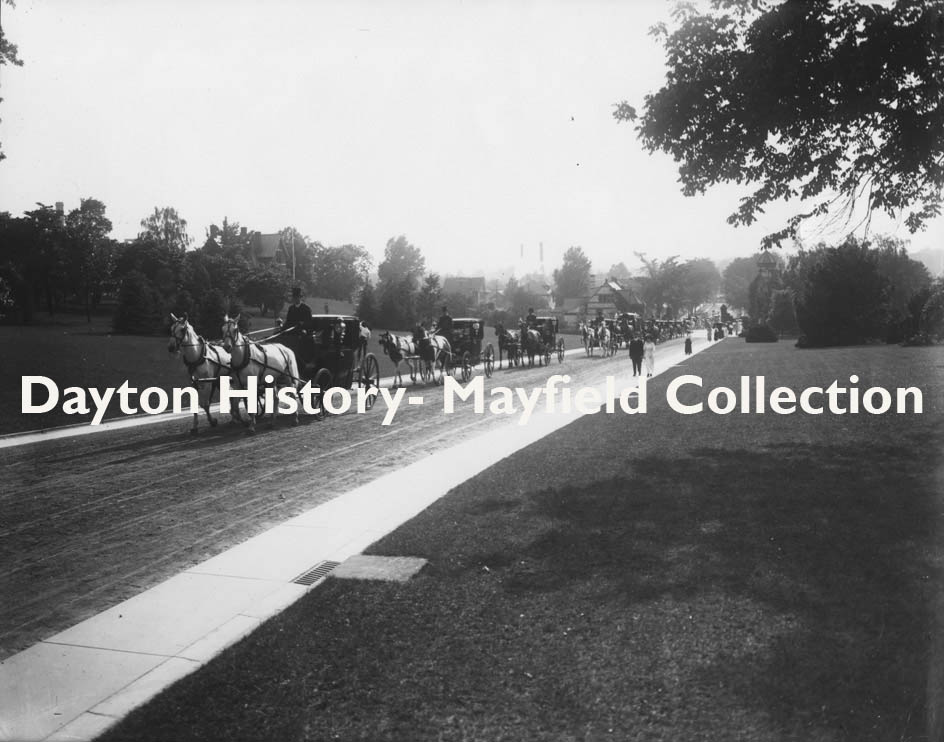 While traveling to Boston in late April of 1912, Wilbur Wright fell seriously ill, but he was not about to let a lingering illness keep him from his work.  Originally diagnosed as malarial fever, it proved to be much worse; Wilbur had contracted typhoid fever.  At 3:15 in the morning on May 30th, Wilbur passed away.  His father, Bishop Milton Wright, wrote in his diary of his son Wilbur: “A short life, full of consequences.  An unfailing intellect, imperturbable temper, great self-reliance and a great modest, seeing the right clearly, pursuing it steadfastly, he lived and died.”  Wilbur’s funeral service was held in downtown Dayton at the First Presbyterian Church on June 1st.  It was estimated that 25,000 people attended in order to pay their last respects to the fallen local hero.  As a final mark of respect, at 3:30 pm, all activity within the city of Dayton ceased and church bells rang out as Wilbur was buried next to his mother at Woodland Cemetery. Pictured here is the funeral procession for Wilbur Wright.  Only family and the pallbearers were in attendance at the graveside service.  This photograph is from the William Preston Mayfield/Marvin Christian Collection at Dayton History. 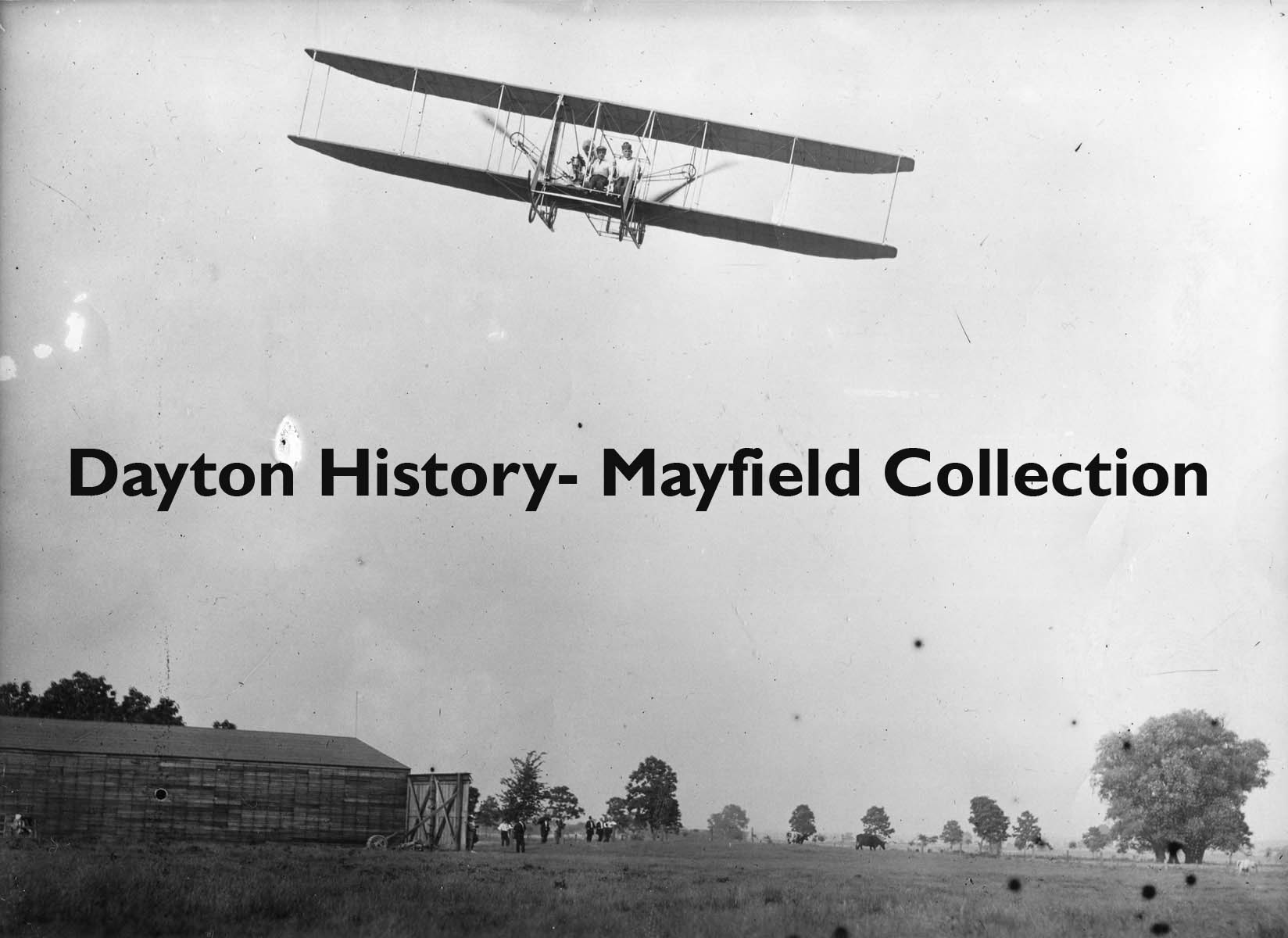 At the dawn of the 20th century, local land owner Torrence Huffman would have most likely found it hard to believe that someday, his old cow pasture located eight miles northeast of Dayton would become a historic landmark.  Huffman had agreed to let the Wright brothers use his 84-acre pasture for their practice flights so long as they agreed to move the cows and horses out of the way. Almost 100 years later, in 1990, Simms Station, also known as Huffman Prairie Flying Field, was designated a National Historic Landmark.  The field provided the brothers space to conduct experiments and practice flying their various machines.  The Wright brothers made 105 flights, resulting in a total of 49 minutes of air time, in the 1904 flying season alone.  Over the next few years, various hangars were built on the property, and the brothers developed and installed a derrick and weight launching system for their aircraft. Shown here are two men flying in a Wright Model “B” at Huffman Prairie in 1911.  The picture is made complete with a side view of the hangar, a group of on-lookers and a few brave cows nibbling grass in the background. This photograph is from the William Preston Mayfield/Marvin Christian Collection at Dayton History. 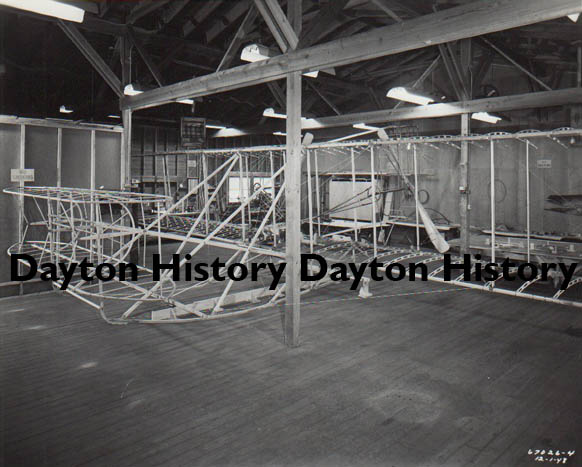 Despite the fact that neither Wilbur nor Orville Wright had received their high school diplomas, both young men were bright individuals with inquisitive minds.  Wilbur was an excellent student with an extraordinary memory and Orville had an insatiable curiosity when it came to science and technology.  In less than a decade, the Wright brothers had researched, built, tested, modified and refined a flying machine capable of heavier-than-air flight, a feat which had eluded man for centuries. In the early 20th century, the Wright brothers applied for and were granted five patents.  Their first patent, number 821,393, was granted on May 22, 1906 for their flying machine.  This famous patent is considered the ‘pioneer’ patent for all other airplanes. Other patents included aircraft with improvements, such as automatic stabilizers, yaw controls, moveable and fixed rudders.  Some of these parts, like the moveable rudder, can be seen here within the skeletal frame of the 1905 Wright Flyer III during its reconstruction.  Once finished, the aircraft was placed on display in Wright Hall at Carillon Historical Park, where it can still be seen today.  This photograph is from Dayton History’s Image Collection. 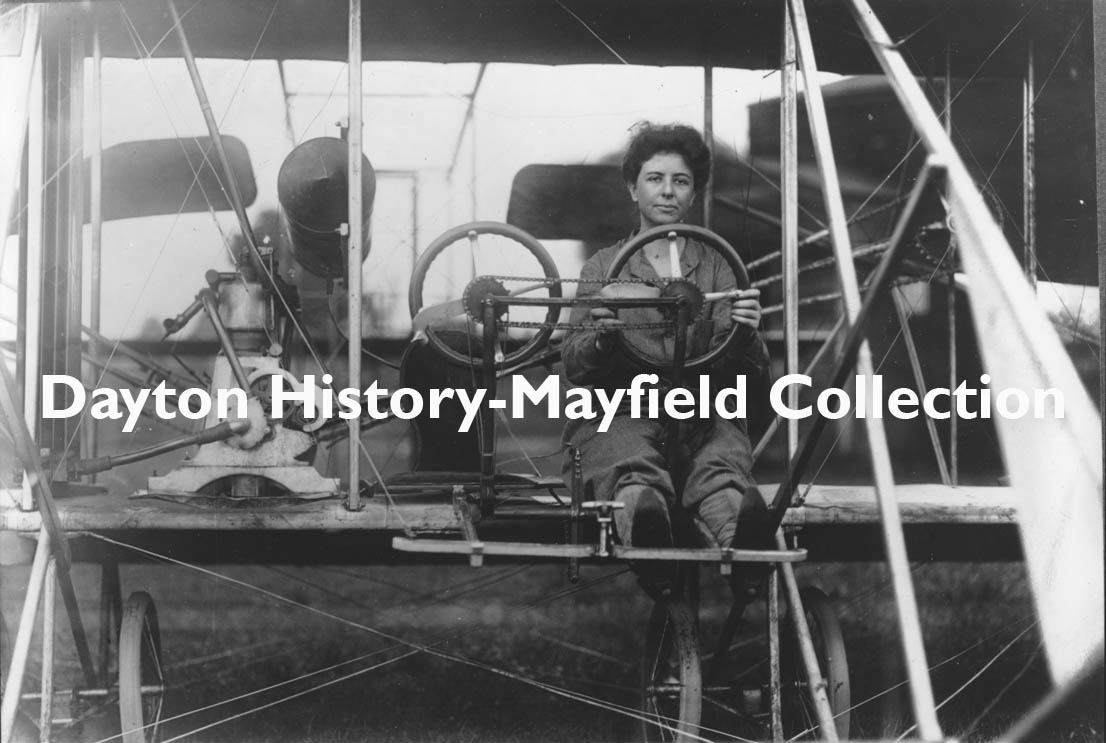 Aviatrix Rose Dugan, Student of the Wright School of Aviation

The Wright School of Aviation opened its door to students on March 19, 1910 in Montgomery, Alabama on a site that later became the Maxwell Air Force Base.  Orville Wright was the principle instructor at the school.  By May of that same year, the training facilities had been relocated to Huffman Prairie Flying Field, just outside of Dayton, Ohio. In the six years of operation, more than 100 individuals learned to fly under the tutelage of Orville and various other instructors.  Some notable students trained there, including:  Cal P. Rodgers, who was the first person to fly across the United States; A. Roy Brown, the famed WWI pilot who shot down the Red Baron; and Lt. Henry H. “Hap” Arnold, who later became the Commander of the U.S. Army Air Corps in WWII.  Three daring women also enrolled in the school, including Mrs. Richard Hornsby, Marjorie Stinson and, as seen here, Rose Dugan. This photograph is from the William Preston Mayfield/Marvin Christian Collection at Dayton History.

Milton and Susan Wright instilled their children with a strong set of core values which would guide them throughout their lives.  They taught their five surviving children that the world was an unfriendly place and that self-reliance as well as the love and support of a close family were essential.   Milton and Susan’s two eldest children moved westward with son Lorin eventually returning to Dayton to settle down.  Their oldest son Reuchlin however, never returned, making a life for himself out west, away from the rest of the family.  The three youngest siblings, Wilbur, Orville and Katharine, developed a close bond, so much so that neither of the brothers ever married and Katharine was 52 years old before she wed.  Pictured here are Wright siblings Orville, Katharine and Lorin, along with other family members and friends at an informal picnic.  The exact date and location are unknown.  This photograph is from the William Preston Mayfield/Marvin Christian Collection at Dayton History.

Explore History Inside & Out with Carillon Historical Park!

Get your general information here!

Things to See & Do

Shop our Museum Store or dine at one of our restaurants.

Explore the sites on and off campus!

The Carillon Historical Park Museum Store offers a variety of quality products at a wide range of prices. Choose from books, historical toys, ornaments, sterling silver jewelry and more. The Museum Store carries products that commemorate the history of Dayton, the Wright brothers, Ohio and The history of transportation. 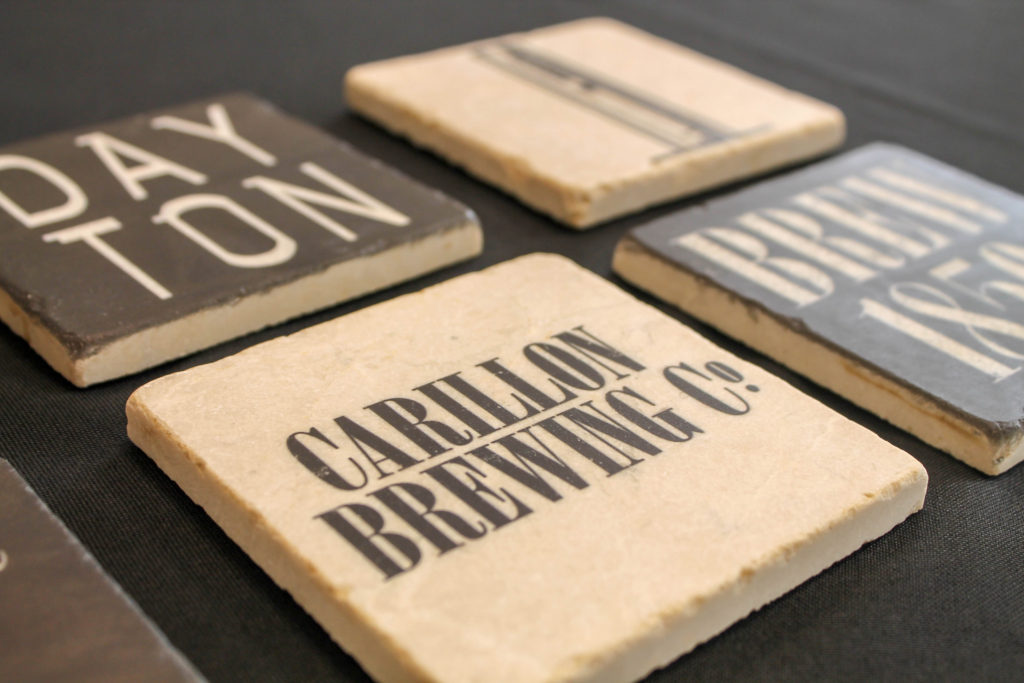 Are you captivated with the history of flight? Would you be fascinated by a glimpse into the mind of Orville Wright? Do you enjoy visiting beautiful, historic homes? If you answered “yes” to any of these questions, then Hawthorn Hill is the place for you!

The building itself has had a long and colorful history of hosting distinguished visitors like Charles A. Lindbergh, and President Franklin Delano Roosevelt. 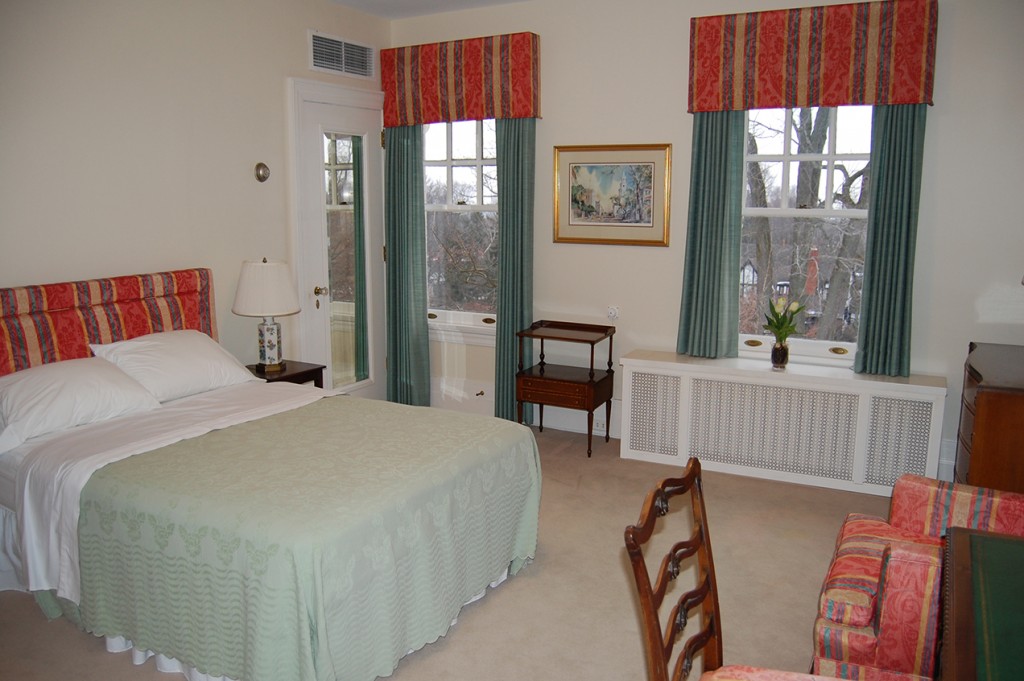 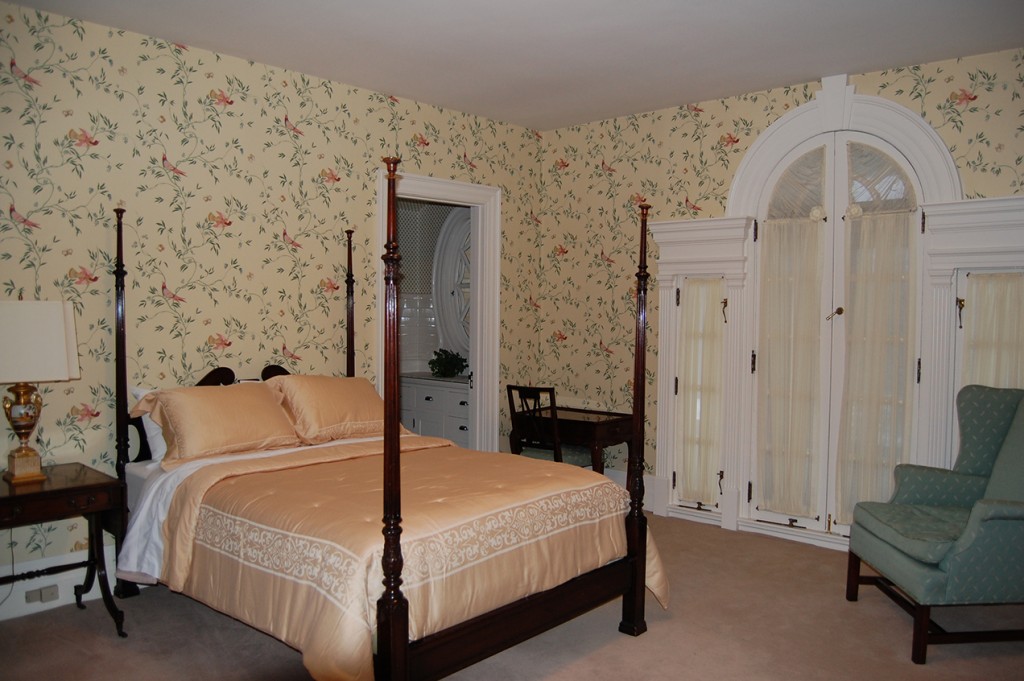 Where else can you see the original 1905 Wright Flyer III, the world’s first practical airplane and National Historic Landmark, the 1835 B&O (Grasshopper) steam locomotive, and the first automobile self-starter? Only at Dayton History’s Carillon Historical Park, that’s where!

The Park immerses you in the region’s history – from Dayton’s founding in 1796 through two centuries of expansion, industrialism and innovation. Learn about these revolutionary achievements while strolling through the Park’s 30 historical buildings and interacting with the hundreds of artifacts in our exhibits. 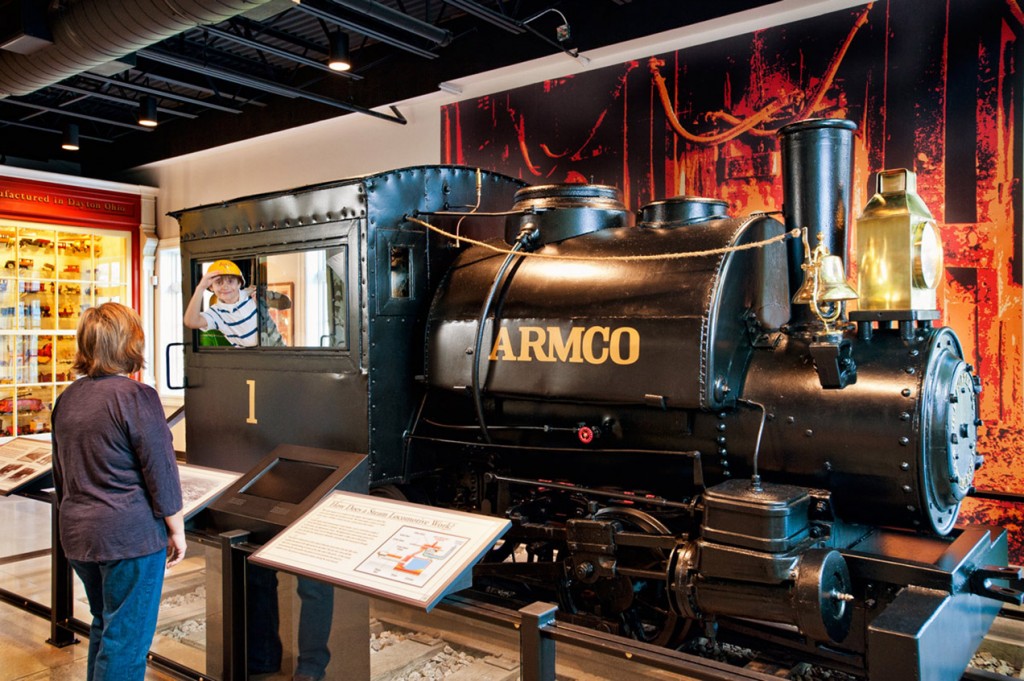